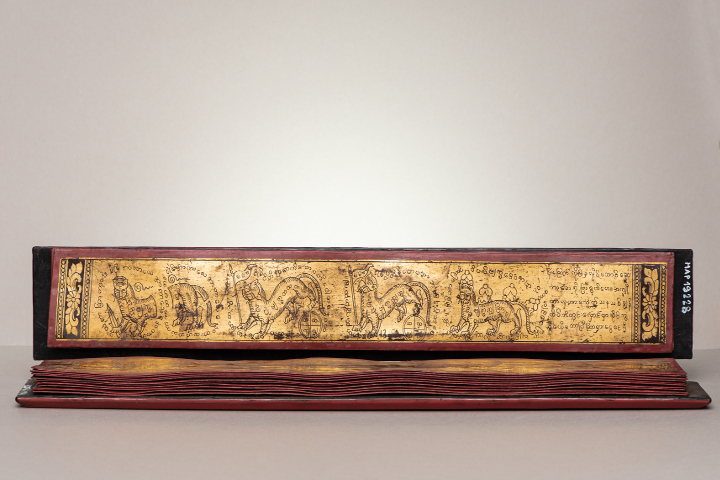 The Burmese collection is made up of unique texts associated with Therevada Buddhism originating from Myanmar (formerly known as Burma). More than half of the collection consists of parabaiks, i.e. traditional concertina books made from handmade paper with local characteristics. They often include ritual and astrological texts. Some valuable parabaiks were used for commercial production. The obverse depicts scenes from Buddha’s life, while the reverse features fragments of the original old texts in the Shan language, or, less frequently, Pa’O language. A few of the books have beautifully adorned covers, with reliefs in lacquer worth particular attention (MAP 19772 and MAP 20100).

The Asia and Pacific Museum also holds a rich collection of sacred Buddhist texts written in the Pali language. They include kammavaca books on lacquered cloth or metal sheets. The books are beautifully ornamented with characteristic elaborate text, which is a style of Burmese script. The other books are carved on palm leaves with lacquered and gilded edges. They contain texts from the Pali Buddhist canon Tipitaka.

Most books are contemporary but a few probably date back to the 19th century.

The collection was preliminarily described by Georg Noack, PhD (Linden-Museum Stuttgart), and it was subsequently described in detail by the project team member Jotika Khur-Yearn, PhD (SOAS, University of London).